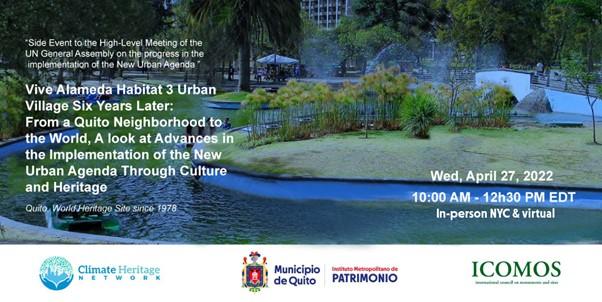 The side event will focus on the role of cultural heritage in the implementation of the New Urban Agenda. Antonia Gravagnuolo, researcher at the Italian National Research Council - Institute for Research on Innovation and Services for Development (CNR-IRISS) and ICOMOS member, will intervene on how the New Urban Agenda is currently “Promoting the ecological and social function of land, favouring ecosystem-based solutions to ensure sustainable consumption and production patterns”. Within the same Panel “Reflections on the Culture Provisions of the New Urban Agenda”, four experts will be involved to reflect on the key thematic in which culture is addressed in the New Urban Agenda and the state of progress of heritage-led strategies for urban/territorial sustainability so far.

The event can be joined in-person – at Van Alen Institute, located at 303 Bond Street, Brooklyn, NY  11232 – or online, both after registration

This event comes on the eve of 6th anniversary of the New Urban Agenda’s adoption at the landmark Habitat III Conference held in Quito, Ecuador in September 2016.  The Habitat III conference was instrumental in advancing the global understanding of the role of culture and heritage for sustainable and resilient cities and human settlements. It occurred only a few months after the UN General Assembly had taken the innovative decision to expressly include natural and cultural heritage in the UN Sustainable Development Goals, through SDG 11.4. The amplification of SDG11.4 in the urban context can particularly be seen in sections 14c, 38, 45, 52, 60, 69, 97, 124 and 125 of the New Urban Agenda.

The side event will use as a point of departure the Habitat III Urban Village Project “La Alameda Historic District of Quito: Forging Heritage Tools for Urban Sustainability (Art and Citizen Participation)”. The project is known informally as “Vive Alameda” after the Quito neighbourhood that was home to Habitat III and which is also part of the “buffer zone” of the Historic Center of Quito, the first city inscribed on the UNESCO World Heritage List. The Vive Alameda project was a collaboration between different community actors and various local, national and international cultural heritage experts. They came together to explore, experiment and examine the historical layers of fabric, values, cultures, traditions and experiences of the historic La Alameda neighborhood to test the cultural concepts proposed for inclusion in the New Urban Agenda and to develop and showcase tools to implement them. The Project aimed to benefit the neighborhood through the creation of concrete cultural heritage-based sustainable development tools and also to point the way towards viable strategies, replicable around the world, to realize the potential of culture to drive sustainable urbanization, as expressed in the NUA.

Six years later, participants in the Vive Alameda project as well as partner and colleagues will assemble to consider the potential for culture and heritage in sustainable urbanism documented in Alameda and reflected in the New Urban Agenda – and the ongoing efforts to realise that potential.

The side event of the UN General Assembly will focus on the treatment of culture and heritage in the New Urban Agenda, including the following: